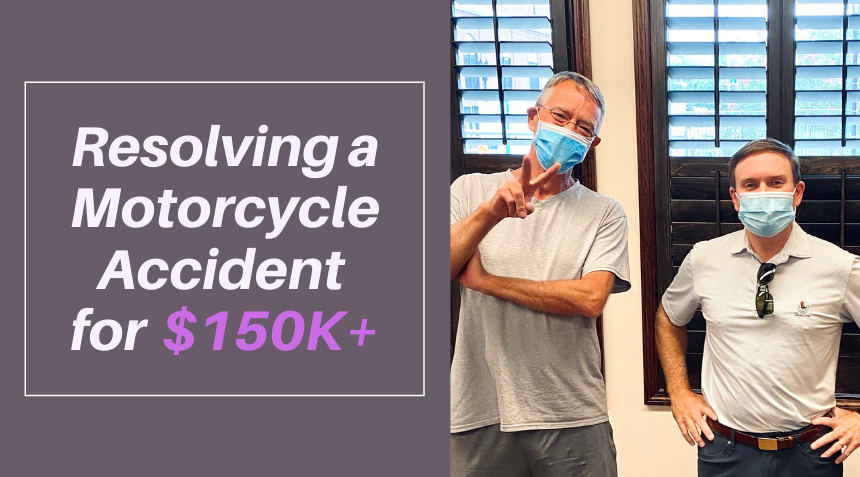 When a motorcyclist crashes, they lack the protection of an enclosed vehicle and are more likely to be injured or killed. For Rick, he was able to avoid a severe collision by driving defensively, when a vehicle negligently merged into his path.

In November of 2019, Rick was riding his motorcycle on York Street in Aiken, South Carolina. He was in the median, attempting to turn when a vehicle merged into his path. To avoid a collision, Rick was forced to lay down his motorcycle. While he prevented a more serious accident, Rick still suffered injuries from the accident and was taken by ambulance to the hospital.

At the hospital, Rick was diagnosed with a closed fracture on his left leg. Ten days after the collision, he underwent surgical repair and endured months of physical rehabilitation in an attempt to return to his normal life. After Rick’s initial treatment, his physicians still recommended two more surgeries to repair his injured leg. Today, he still suffers from his injuries due to the accident, which affected his career.

We’re happy to say that we have resolved Rick’s case less than a year later. Not only did we receive the limits for liability from the at-fault’s insurance policy, but we were able to find an additional $100,000 in coverage, through his personal auto policy. Even during a pandemic, we worked diligently to close Rick’s case to ensure that he got the best results possible and sooner than was expected.

Don’t just take our word for it, hear from Rick about how we did!

If you or your loved one have been injured in a motorcycle accident Georgia or South Carolina, a personal injury lawyer may be able to help you obtain compensation for their medical expenses, pain and suffering, and lost wages. The Augusta personal injury lawyers at M. Austin Jackson Attorney at Law specialize in helping victims that suffer from negligence of others.