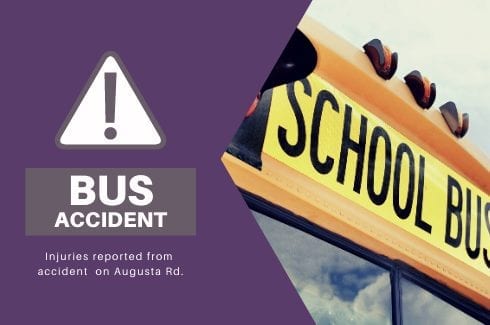 Injuries were reported in an early morning accident on Wednesday, October 14th. The crash occurred in the 4400 block of Augusta Road at Belvedere Road involving a small school bus and a pickup truck.

Aiken County Public Schools spokesman Mike Rosier said a driver and two students were on the special-needs bus. The students were transported to an Augusta hospital for “precautionary examinations” after being brought off the bus in neck braces.  The bus driver did not report any injuries but accompanied the kids to the hospital.

According to Lance Cpl. Tyler Tidwell of the South Carolina Highway Patrol, the three occupants in the pickup truck were also taken to the hospital. Tidwell told News 12 that none of the injuries were life-threatening.

The accident is currently under investigation. Tidwell said the crash happened as the bus and pickup were traveling in opposite directions on Augusta Road. Both had a green light and the bus tried to make a left turn in front of the pickup, he said.